Our quality standards apply also in terms of service, technical expertise and advice.
Our dedicated employees are happy to assist you with know-how and experience in your daily business.

Called and chosen by GOD over 12 years ago the vision came alive. The network is created to broadcast Christian programming not just for Christian People, but for all people. They broadcast an array of television programming that air on our 24/7 channel network on all devices and platforms which includes Apple TV, Roku, Smart Televisions, Mobile Phones and other devices. PTWWN holds contracts with Comcast and Spectrum Cable to carry television broadcasts on their entire footprint. They also have been blessed to partner with Glory Star Satellite which broadcast our channel to other countries around the world via free to air satellite/internet.

Market by market, PTWWN is promoting “The Kingdom Takeover Campaign”.  This campaign is to connect with pastors in different markets to help them produce Christian programming on secular channels so that those who are not exposed to or watch “Christian Television” can hear the gospel news.  Their programming includes traditional preaching, but also inspirational talk shows, independent movies, minis series and variety television to reach all walks of people in the Christian and secular television world.

The mission of Preach The Word Worldwide Network TV is to produce and broadcast dynamic and original Christian television programming to bring healing, restoration and inspiration to the world. 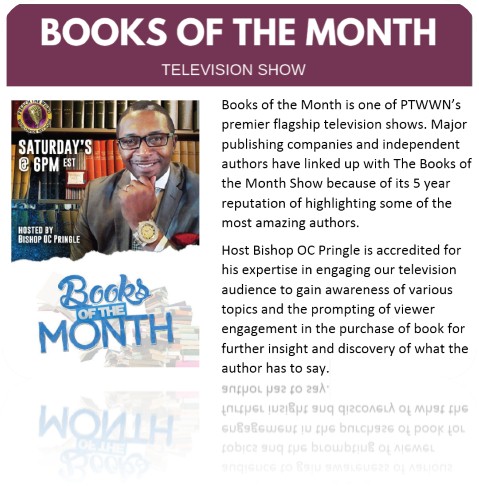 ✓ WIDER AUDIENCE. Be Seen over a million avid reads and book lovers on TV.

✓ BRANDING. Gain credibility as a reputable author. Brand yourself as an expert author and a household name.

✓ SALES. Increase your sales activity with the visibility you will be getting.

✓ PROJECT INVOLVEMENT. Promote your work, your gift, your life. Inspire!

You have the option to either go to their station in GA as a guest or do a remote access via Zoom. A pre-interview will be done before the show. You can choose between 2 options:

Full Segment (30 minutes) where you’ll have the entire show all to yourself.